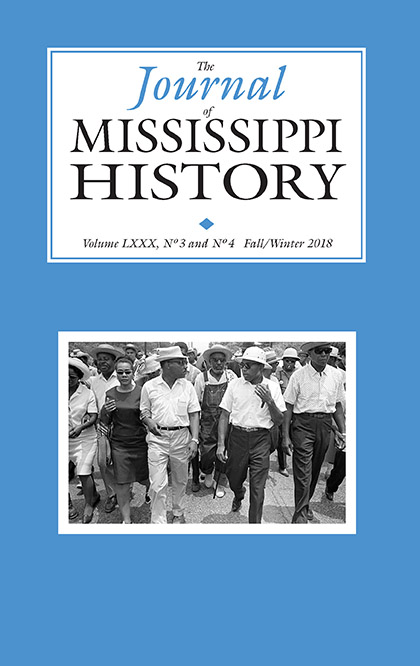 Since 1939 The Journal of Mississippi History has been publishing lively and engaging articles by distinguished scholars on the history of the state, the Lower Mississippi Valley, and the South. Topics range from Native Americans and prehistoric archaeology to the Territorial years, from the Civil War to the civil rights movement. Many issues also contain book reviews and news of people and events in the Mississippi history community.

The journal is published by the Mississippi Department of Archives and History in cooperation with the Mississippi Historical Society. Annual subscriptions begin at $35 for individuals/organizations. ﻿To submit an article for consideration, please contact Dennis Mitchell at dmitchell@meridian.msstate.edu. Preferred manuscript length is 25-30 pages (double-spaced), exclusive of footnotes. Illustrations–photographs, drawings, maps, tables–that enhance the article should be included and placed in the text. The Chicago Manual of Style should be followed for grammar and formatting footnotes. Submissions are peer-reviewed to determine whether to accept for publication.

Past issues of The Journal of Mississippi can be searched using the database “America: History and Life,” which is available in most research libraries. Simply type the title of the journal in one search bar and set its search field set to “SO Publication name” in the dropdown menu. Any additional search bars can be used to narrow searches within the journal by subject, year of interest, year of publication, author, and so forth.

Web design and hosting by U.S.NEXT